Is it a big surprise that the US President, Barak Obama, would remark that he did not watch the 'Restoring Honor Rally', the biggest event at the Mall on 8/28/2010?

According to 'Nightly News' Mr. Obama said: "It’s not surprising that somebody like a Mr. Beck is able to stir up a certain portion of the country. That's been true throughout our history,”.

Not surprising someone is able to stir up certain portion of the country? Ya think?

Why would the President be interested in 'restoring honor'?

This past week we have witnessed a couple of points of DIShonor; here is one:

Why in the world would President Obama be interested in Restoring Honor? He might show an interest in honoring the dead and injured on that ship by not thwarting the trial for political purposes! These folks and their families they left behind, and indeed the nation, deserve to see justice meted out for the murder of our nation's sons in the persons of our military.

Mr. Beck's underlying theme for the rally was a nearly year long focus on Hope, Faith and Charity. While the rally's focal point was clearly on God, this rally was the culmination of an 18 month long message that started with the '912 Project' where Principles and Values were outlined and an invitation was made for people all across the nation to sit down and review them, adopt them, commit to them and then share them with neighbors. They were based in part on the Military code of HONOR.

How ironic that Mr. Beck's guest speaker, Sarah Palin, honored 3 soldiers at the rally just 48 hours after the announcement was made to halt prosecution of USS Cole bombing! Less than 24 hours later Mr. President said he did not watch the Rally. Did he 'just' miss the Rally? Or, did he miss the point.

Here is another point of dishonor:
How is this HONORING 'We The People' who in consistent polling shows 2 to 1 support for those states, like Arizona, who are making an effort to suppress the flood of illegal immigrants into the U.S. Honor would dictate the President lead by example in upholding the laws of this land especially, when not doing so undermines the efforts of those who do demonstrate respect for their fellow Americans and has resulted in kidnappings, murders and general mayhem to U.S. residents who live close to the southern border.

Actually, for this past year and half there have been many times when 'honor' should have been the leadership quality and character utmost in evidence by the President and administration but wound up being replaced instead by turning a willful eye to recreating the 'standard' of character with watered down [formerly called dumbing down] vernacular designed to misdirect the mind of the person who would ordinarily find the replacement ideology objectionable and unacceptable. Nowadays, honor is reclassified and the ideals one held before have been rezoned in our psyche to the extent that we are developing mental blurred vision. If we squint our mind's eye we can barely make out the familiarity of the kinds of honor that President John Kennedy was regaled for in the movie PT-109; or Audie Murphy stood for as the most decorated soldier of World War 2! Those of us raised right after that war -- the legendary time of the 'greatest generation' -- learned from our parents all about honor. A 'man's word' and his 'good name' were related to his honor. It meant something to possess a fine reputation. We had leaders for this country who from time to time have manifest exceptional honor. And some who have not, and today, one who WILL not!

The message to restore honor is resonating with many Americans because we understand and recognize the need to reverse the curse of 'me'ism'. Where is Mother Theresa today? She was honor. Where is Ghandi today? He was honor. Where is Dalai Lama today? NOT HONORED by this President. A truly peaceful and honorable man and our President closed the door to the White House and put out the 'do not disturb sign' to this man in October 2009. After the nation winced in a collective sigh of incredulity he finally agreed to meet with him in February of 2010 .

Shame on ALL OF US for allowing an America to develop which relegates all things to the realm of politics. When we would postpone justice until after an election because it might 'effect' the outcome; When we will grant permission to 5 states to not meet the deadline for absentee balloting for our military thus thwarting their voices in the representational government they are putting their lives on the line to protect; When we will release ILLEGAL IMMIGRANTS already INCARCERATED back out onto the streets, into the neighborhoods onto the social systems of states that are already operating in the red in no small way because of the burden of costs associated with illegal immigrants, to effect an outcome at the ballot place; we have manifestly abandoned all evidence of honor. If our own men in uniform cannot depend on our word though they have fulfilled theirs, where is the honor? 17 dead and 39 injured military personnel deserve to be honored with justice! Tens of thousands deserve to vote! 1200 deserve to be at home working their real jobs and loving their families not stationed at an out of control border due to dishonorable management of it by the administration responsible.

Glenn Beck's timing is essential. The train is about to run out of track and we will all be in a fix soon if we don't put on the brakes of this forced re-creation of our nation by people without honor and without desire to hearken back to the kind of America where honor was 'the way of life' and respect was the consequence to its presence in our lives. This Restoring Honor campaign has touched many of us. It has been the eye drops that have removed the film that obstructed our vision from seeing even how we, ourselves, have forsaken honor.

The passionate discussion about the Ground Zero Mosque is a 'sign' of the return of Honor. Those who have stepped up and acknowledged there is no doubt a constitutional premise for this mosque to be built there but the 'honorable' thing is not to impose the religious practice of building a monument at a place where that religion believes they have made a conquest. Honoring the sensibilities of many Americans would be a demonstration of character.

It is too bad Mr. O did not catch the many demonstrations of Faith at the Restoring Honor Rally.

Perhaps the seed has been sown and as it is watered God will make it grow and we will once again be a people and nation that will attract men and women of honor from all sorts of countries seeking to live free rather than the crooks who seem to see America as a land of exploitation and not exploration!

Alas, it is clear. Those who voted for change got it. The honor we have now is referred to as 'honor among thieves'. Ironically, the attempt to abscond with honor nearly succeeded.

Will we freely sing this with honor in our hearts? "`Alleluia! the salvation, and the glory, and the honour, and the power, [is] to the Lord our God;" Rev 19:1 [Young's Literal Translation]
Posted by Toni at 11:35 PM No comments: 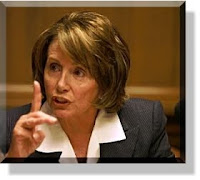 The 'Word' is, we must be punished!

Fantasy Island has a dark cloud hanging over it and Ms. Pelosi is not happy! She wants to know WHO is FUNDING the OPPOSITION to the Ground Zero Mosque!?!? :::::reaching into my pockets and turning them inside out:::::: Yep, must be me. I am broke, somebody took my money in order to finance opposition, no wait! Because I think it an insulting, ludicrous and ill advised idea, thus I oppose this abomination, I am the opposition!

Before today, I was opposed -- but quietly. You know, the quiet that when you hear something so wrong you have a little talk with yourself in your head and decide on the whys and wherefores that make it wrong and then you file it in your silent majority opinion file. But, today, Ms. Pelosi interjecting herself into my RIGHT to speak my mind has caused me to get it out of my head and out into public domain. I OPPOSE THIS and NO FREAKING BODY IS FUNDING MY OPPOSITION...I am of sound mind and self will and I OPPOSE THIS! Got the WORD yet?

Why do I oppose it? Because I don't approve of anyone coming to my country, slaughtering my fellow American's, and then erecting a trophy on the mantle of the killing field! It is not about their religion or their right to practice it. It is not because they are coincidentally of the same religious affiliation that when radicalized has focused malicious intent against my country. It is because it offends the sensibilities of Americans and it imposes an attribute of arrogance over our sensibilities. If you don't like America the way we are LEAVE ALREADY! No one put a gun to your heads and forced you to immigrate to this country. You are free to return to your culture any time you wish. Just stop trying to change ours.

As for Nonsense Pelosi, November 2nd can't get here soon enough. It will be sweet victory to know that your days are numbered as house speaker. You will be moved out of that very important office and your finger wagging, name calling, chiding and impudent manner will be out of the public eye, yet again. Relegated to just another representative from California, you will no longer wield the power to belittle the fine citizens of this great nation. By the way, I am sure the countries where the Mosque and Islam religion is the ONLY church you will see would welcome you with opened arms to their little close nit family. You will have to get used to sitting down and shutting up unless spoken to; dressing more modestly; wearing a head scarf at least and a burkha at most as a sign of your lack of standing. You being the wrong gender and all. Hold an office where you can wag your finger at a man? Oh, please, try it there.

Lady, you have stepped way over the line and are seriously standing on the last nerve of the people of this country.

Hear me really well...read my lips...I OPPOSE THE MOSQUE BEING BUILT NEXT TO GROUND ZERO. And NO ONE IS FUNDING ME. I just opened my mouth and said it..then I sat down and wrote it here. I paid for this site!

That's my opinion and I am sticking with it.