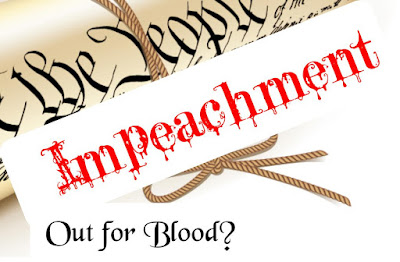 “The President, Vice President and all civil Officers of the United States, shall be removed from Office on Impeachment for, and Conviction of, Treason, Bribery, or other high Crimes and Misdemeanors.” -Article 2, Section 4 U.S Constitution.

January 21, 2020, the Senate is set to begin their role in an impeachment process designed to remove the 45th president of the United States, President Donald J. Trump. The actual authority for an impeachment process is set out in Article 2, Section 4, [above] and is quite clear what constitutes grounds for impeachment. Drawing your attention to this sort of plain – though a dichotomy too – language: “Impeachment for, and Conviction of, Treason, Bribery, or other high Crimes and Misdemeanors”. The president must be found guilty, convicted, of treason, bribery -- plain; or other high crimes and misdemeanors.  -- Some ambiguity in order to be removed from office.

The two articles in the Senate for impeachment: ‘Abuse of Power’ and ‘Obstruction of Congress’. Sadly, in today’s culture, wisdom, common sense and logic have slipped through the figurative fingers of an affect driven polity. In place of the aforementioned wisdom etc., is the new big important decision maker and authority: FEELINGS, an emotive premise. This reduces everything to what little kids say all the time when things don’t go their way, ‘it’s not fair’. Right? Right! Instead of looking at all things rationally most today want short clips of news parsed out to meet the most common emotions, fairness and outrage, and if it does not deliver either one or both the dissonant jar to their emotions becomes intolerable. Hence, the two nonsensical articles handed to the Senate to try the president. Abuse of Power? The President of this country is generally referred to as the ‘most’ powerful man on earth. And, in this case, for the first time in 3 decades, it is appropriate to recognize this as factual. You might imagine to ‘abuse’ that power it must have been something really big. But did he actually abuse his power in requesting assistance from the Ukrainian Government in their investigation of their corruption. Did you know at least a billion dollars went missing given to them by our former administration? A billion taxpayer dollars? Don’t you think we should have some accounting?

The other charge ‘obstruction of congress’ boils down to certain key administration personnel, past and present, have been charged with ‘executive privilege’ and thus until the Court deems their privilege revocable, they cannot testify. Why privilege? This is a big NATIONAL political cum criminal [if the House has their way] case. But, while it is congressional it still is required to follow certain amendments of the Constitution, like the 6th Amendment: “In all criminal prosecutions, the accused shall enjoy the right to a speedy and public trial, by an impartial jury of the State and district wherein the crime shall have been committed, which district shall have been previously ascertained by law, and to be informed of the nature and cause of the accusation; to be confronted with the witnesses against him; to have compulsory process for obtaining witnesses in his favor, and to have the Assistance of Counsel for his defence.” In  other words, a criminal defendant's right to an attorney is found in the Sixth Amendment to the U.S. Constitution.  It requires the "assistance of counsel" for the accused "in all criminal prosecutions." This means that a defendant has a constitutional right to be represented by an attorney during trial. In the case of client/attorney there is understood a ‘privilege’ where the attorney cannot be compelled to divulge his client’s conversations without the express and specific permission by the client. In the case of the President, it doesn’t take a rocket scientist to understand you do not want the world to be informed of sensitive and strategic national security related information. Nor do you want the president’s own attorneys to be compelled to divulge their client’s conversations without the expressed and specific permission of and by the president. These matters too could be strategic as related to national security. It is doleful indeed that this administration is faced with an intolerable and unacceptable number of questionable individuals who have divulged [leaked] information with negative causal results both to our nation and our national security.

Not a few citizens who watched the laborious House Committees Impeachment process found it a total bore. They trotted out people with clear biases against the president who manifested clear vehemence even in general conversation as well as testimony. The two leaders did not exercise their right to subpoena any of the individuals they felt were key to their case. Without actual treason, bribery or other high ‘crimes’ and ‘misdemeanors’ they created their own charges both of which could be found easily dismissed or found not guilty.

First, the Senate has to lay out and agree on the ground rules. The agreed upon rules will dictate how the Senate proceeds. Will they dismiss immediately as there were no acceptable charges? Will they call witnesses, witnesses the House hastily opted not to call so they could rush the process to its finale before Christmas break? Will they require one for one witness testimony vis-à-vis, they bring theirs the Senate bring theirs? Will they limit the time the Senate will allow the trial to last or will they let it run its course cutting into the 2020 presidential campaigns for those Senators running for president? Will the Senate leader hold his ground and keep the process as pure and close to constitutional process as can be?

Updates as interesting and new points arise from the Senate process.

DISCLAIMER: The thoughts published on this blog, in total, are the opinions, thoughts and considerations of the writer/author of every post published. It is assumed that research by the reader will lead the reader to their own conclusions. It is not the writer’s intent to make a judgment.

;All artwork contained on this blog entry as well as archived/historical entries belongs to ©Lightwritingmatters 2015<<< permission must be requested and approved by the author to reproduce in any format and for any reason.√†

Email ThisBlogThis!Share to TwitterShare to FacebookShare to Pinterest
Labels: Posts