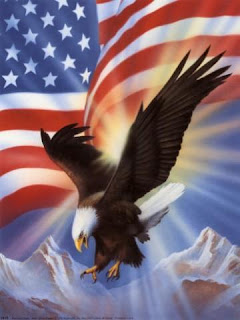 From the halls of history: By now you’ve likely heard about the lady in Texas whose personal property, the American Flag, was removed from her work area and laid on the floor. The objection to its presence in the office which is shared with other workers was from an offended immigrant co-worker. While the issue has been resolved, her flag back up and apologies from her employer have been given, the incident raises an opportunity to promote INDIVIDUAL LIBERTY!

Is the work place ‘sacred’ where you may display your personal property without objection? Was the 3’ x 5’ flag a bit much for the ‘office’?

What are the divisible issues here? Many people are so ignorant of the respect that is required for the flag -- completely unaware of the ‘law’ that regulates its display. Another issue is the Work place display. Compound layers of personal liberties.

At the heart of the issue is the disrespect shown the Flag by laying it on the floor. The United States code, Title 4, section 8[b] reads: “The flag should never touch anything beneath it, such as the ground, the floor, water, or merchandise."
[http://www.law.cornell.edu/uscode/html/uscode04/usc_sec_04_00000008----000-.html] Back in the day the proper handling of the flag was taught in grade school. Do you remember being at the raising of the flag on the flag pole at school where the pledge of allegiance was recited? Did you assist your school’s custodian when he lowered the flag each afternoon? Were you not ever vigilant to never let the flag fall from your hands, or in anyway touch the ground? Have the parents and the schools not continued this exercise of appreciation in liberty by respect for Liberty’s symbol?

Of course, the other issue is personal statements and ideologies in the work place. Many companies, government agencies, employers require an employee area be void of any personal items including family pictures, knick-knacks, posters, banners, etc. It is a privilege to be gainfully employed; having the freedom to express yourself is really subject to the boss. Display of ‘Old Glory’ in your office falls under the ‘freedom to express yourself’ column. But individual liberty cuts both ways. The co-worker had a right to take offense, to voice dissent, to seek resolution. If she is the one who took the flag down and put it on the floor however she does not have the right or the liberty to show such disrespect to our Flag!

The story has it, Debbie McLucas, the employee whose flag was at issue, put her flag up in her office for the Memorial Day weekend. She has an incredible emotional attachment to the significance of our Flag. Her family has strong ties to the military, including a daughter currently serving in Iraq. Perhaps the folks who found Ms. McLucas’ display offensive fail to comprehend the sentiment the Flag holds for Americans. Ruth Apperson Rous wrote “I Am Flag”. The following is taken from her Patriotic writing:

Americans, I am the sacred emblem of your country. I symbolize your birthright, your heritage of liberty purchased with blood and sorrow.
I am your title deed of freedom, which is yours to enjoy and hold in trust for posterity.
If you fail to keep this sacred trust inviolate, if I am nullified and destroyed, you and your children will become slaves to dictators and despots.
Eternal vigilance is your price of freedom.

While the work place may or may not be the place to have a flag so prominently displayed, Ms. McLucas was surely within her rights to stand up for the emblem of our country, our heritage of LIBERTY, our title deed of FREEDOM. She had an obligation to speak her mind as she found our Flag nullified, laying on the ground, an object of offense to a non citizen of the republic for which the Flag stands!

The blood and sorrow that has been given in solemn protection of our individual liberties and rights calls out to all of us to take a stand whenever symbols of our great REPUBLIC come under attack. Our allegiance to the Flag demands we honor it.

Ms. McLucas has honored what the Flag stands for by her actions. The display in the work place aside, what went right was permitting the flag to be displayed once again. THAT was a nice bit of news to read at a time when our INDIVIDUAL LIBERTIES are being eroded so subtly many Americans are not even aware of it. Debbie McLucas is the ‘yellow rose’ of the ‘Lone Star’ state!
Posted by Toni at 2:16 AM No comments:

Dateline---Hilo Medical Center, Hilo, HI.
Ms. Hirono, together with 10 individual stakeholders from the health care industry, engaged in discourse at a round table forum. There were about 50 others in attendance comprising the audience who later were able to ask questions and give first hand accounts of their nightmares with current health care inequities.
Congresswoman Hirono was personable and cordial. The preamble to the meeting of course was to laud the president's health care reform agenda stating that a couple of weeks ago during a meeting with health care stakeholders he 'promised to make health care reform his #1 priority for the next 6 months.' When asked what this reform would look like when it was done we were told 'there is no reform right now. 'This is a very bottom up process which will percolate the ideas and suggestions gathered at these round table discussions upwards.'
The consensus of the stakeholders was clear; more efficient/timely and more reasonable reimbursements, move the focus to one of primary care, engage multi professional practitioners more, and promote a preventative culture!
Rick Jackson, president of Hawaii Health Care Plans, said "What won't work is pushing down reimbursement.' He also said, "To focus on fraud makes for great headlines but is in error." Also noted to the congresswoman was his concern the 'feds would impose reform that would rip apart Hawaii's pre-paid health care system.'
When asked if there was reform the government has managed which has been effective and could serve as a model for health care, Ms. Hirono answered, "There is no reform currently." Further queried if there was a model she said 'Canada and Scandinavia'.
The congresswoman summed up the meeting by sharing that she was a 'single payer' proponent and would be heading back to D.C. to work on a bill she hopes will be ready June or July. She acknowledged it was an aggressive goal but felt confident working with Congressmen Henry Waxman and Barney Franks it was doable.
It is noteworthy to mention the group of attendees was diverse. Ms. Hirono was not preaching to the choir -- which seemed all the more apparent as one took note of the folks in lab coats with hospital ID's. However, it was a textbook example of representative government at work!
Keep an eye out for the bill. President Obama wants reform that addresses "Cost, accessibility, quality and choice." Lofty goals, but there is no understating there are no holes barred in this endeavor!
Not sure how single payer health care works? Google 'single payer health care'. Or, contact Congresswoman Mazie Hirono: http://hirono.house.gov/contact.shtml