2020 Candidates -- Could They Have Dirty Laundry? 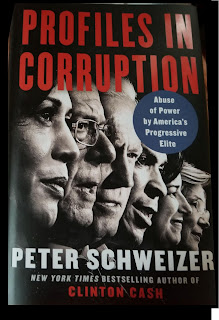 Profiles in Corruption – Abuse of Power by America’s Progressive Elite

ACT: Peter Schweizer’s book details the case that supports the title of his newest release. Out today, January 22, 2020, the book ends up with 90 pages of notes with resource sites to establish veracity of the authors findings on your own. In the coming days watch for commentary detailing some of the more interesting details.

OPINION: As this site is predicated on ‘News & Events Impacting Your Individual Liberties’ [libertypolepost.com – Title Description] a review of this and other books is relevant as to how our individual liberties are being impacted by the electoral process. In this case, by way of vetting some of the candidates seeking election to the Presidency in 2020.

EDITORIAL: With the election some 285 days away, it would seem there may be some inconvenient facts which will be exposed that adds critical information into the public domain for the electorate to read, prove and decide how they will vote. It will be interesting to see the struggle for some who will clearly see the rock and the hard place their ideologies and their favorite candidate have put them in. For some 3 years so many folks have vaunted their high moral ground by making inflammatory remarks, engaging in impeachment frenzy, in parading out every miniscule mistake or seeming mistake the man they believe stole the election -- while it appears living pretty much like the very man they have alleged with great disdain is the scourge of the world. While our President has lived a life unlike most of those who support him having lived out loud for decades in New York in a fairly flamboyant lifestyle with all the trappings, he has toned it way down since being sworn into office as President. His supporters know he is known for making what some call ‘shady’ business decisions before becoming president and many found his character assassinations of his 2016 Republican rivals very uncomfortable, unacceptable. And, that quality has not subsided since becoming President. He has refocused his ire toward a completely different batch of people from the ‘media’ and ‘entertainment’ personalities as well as some of his political opponents. But, interestingly, the first strike has always been the ones who ultimately wind up in his Twitter cross hairs. They hold up obscene images of him, make public announcements with vulgar and profane words about him, make editorial remarks as if they are in the know setting him in a most unbecoming and negative light and so much of America, who did not like it in 2016 has grown to understand there are many who just will not let his election go. Most of his supporters would never themselves behave like he does but you see and hear his rallies. They are fed up with being discounted and disregarded; tired of being called despicable names and accusing them of abysmal character traits, prejudices while demeaning their cultural traditions. President Trump becomes a sort of proxy voice for those who have far more grace and self-restraint to voice their thoughts. They need not. He has and as a consequence, together with many of the positive affects of his presidency they support this flawed man.

This book’s timing is incredible, and I suspect not coincidental. It may be picked up by those in the media who exhibit such contemptible behavior towards President Trump and if so it will likely be focused on the candidates they do not wish to be elected leaving out the information on the candidate they want.

Buy your copy today. It is not yet available in digital format. I couldn’t wait. I went to Barnes Nobles and got mine. Check online where the nearest store is to you. Follow my commentary here and chime in.

Email ThisBlogThis!Share to TwitterShare to FacebookShare to Pinterest
Labels: Posts